The Ochlockonee River Wildlife Management Area is split by interstate 10, so it's essentially 2 hunting areas. If you access from Stoneler Road off the truck route in Tallahassee, you will find one main road that makes a loop that has vehicle access allowed and several closed roads throughout the area. There's a gas line, and it's boardered by the Ochlockonee River. 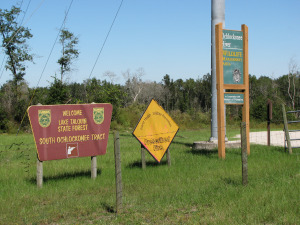 I've been huntin' this area off and on for about 40 years. You have to walkmore now than you used to because of the road closures. But it's worth the trek because this area has got it all.

Along the main road you will see several clearings. These used to be food plots planted by the State. You can drive through and watch the deer eat and it seems they know when it's not huntin' season. But when it is, you gotta get in there amongst them to have any success. The deer are pretty well safe from my arrows now that I've gotten older. Lately it's become one of my favorite turkey areas. It's always fun to set up before daylight and listen to a gobbler boxed in by several hunters trying to decide which way to go.

The other way to get there is the Highway 90 access. Unless you know to look for the powerline, you might miss the steep little dirt road that jumps up the hill to get you to the entrance gate. 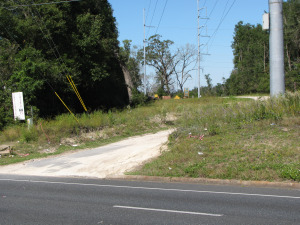 As you drive down Lewis Loop Road, after two or three curves you get to the flats. Now you may think this place is ruined because it's been cut, thinned, and replanted with long-leaf pines and wire grass in some areas. But that forest thinning hasn't slowed the animals down any.

During one of our ventures, my wife Brenda and I saw a couple of coyotes. Rumor has it that they may no longer be a hazard to the turkeys and deer that inhabit this little jewel of a huntin' place. It seems a fellow was turkey yappin' one day, and he sounded so much like an ole hen that the coyotes came to investigate. I believe they got a might too close to that fellow and his shotgun.

During another visit to the area, we ran into a couple of hunters. Ben and Jared we getting ready for their hunt.

Now because I like this area so much, often times I drive through during the year and take pictures. If you look closely at this owl photo I snapped, you'll notice I interupted his dinner. 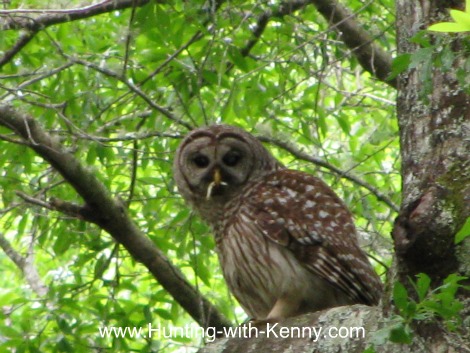 The Florida Fish and Wildlife Commission says that the Ochlockonee River WMA is part of the 16,896-acre Lake Talquin State Forest and consists of nearly 3,000 acres in western Leon County near Tallahassee. The Ochlockonee River forms the western boundary of the area. Most of the area is hardwood forest, cypress swamps, and pinelands. The plentiful wildlife includes red-shouldered hawks , bobcats, coyotes, white-tailed deer, and turkeys. Two short loop roads (approximately two miles) near the two entrances are popular spots for bicycling, hiking, and wildlife viewing. Squirrel hunting is excellent on the Ochlockonee River WMA. Deer hunting, which is best along the river, is available in archery and muzzleloading gun seasons. Camping is prohibited on this area.