It was the first morning of dog hunting season and still dark out when I hit the road. This is the first Thanksgiving opener since losing my dad. For years we always have had Thanksgiving at the hunt camp. We would hunt half a day and then return for the Thanksgiving meal. So as usual, I tracked down 10 from the big creek to short 19. There were signs of a little activity in the ruts; mostly does and this year's yearlings. 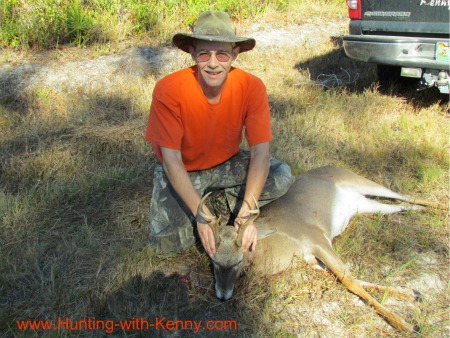 All summer long I had been scouting the Apalachicola National Forest. I frequently saw doe and yearling, but that big buck was always elusive. I'm pretty certain that I saw more Florida black bear roaming the woods than I did bucks. Their pesky populace seems to have increased around these parts.

It was going to be a pretty day, I thought, as I munched on a bacon and egg sandwich in between sips of coffee. I split the ruts driving slowly in my Chevrolet Z71, while I continued to search the sandy soil for tracks.

It wasn't long before I heard voices crakling over the radio from the rest of the crew. "Where you at, Kenny?" asked one of my fellow hunters.

â€œI'm coming up on that ole worm road," I answered back.

Brenda and I boogied on down the road to get on our stand at the rocks. The sun was rising in the clear blue sky, and dew drops shone like sparkling diamonds on the palmettos and pines. My heart leaped with anticipation at the first howl of the hounds booping through the ridge. They were to my left. I jumped atop my dog box and got ready with my Benelli super black eagle 2 in 3 Â½ inch magnum shotgun locked and loaded.

"Which way are they going?" I asked Brenda. With my increasing age and hearing not what it used to be, it's always good to have another set of ears listening. "It sounds like they're going toward the hog pen, I think," she answered. She "thinks?" Maybe her hearing ain't so good either, I thought.

It wasn't long before their steady booping yaps turned to excited shrill barks and howls. It was almost musical listening to the running pack as their voices sang in unison echoing through the trees. By now, we could both hear pretty good.

My heart pounded as the crisp sound of dogs barking grew closer and louder. I scanned the ridge right-to-left and then left-to-right.
"Are you looking?" I asked Brenda. I knew she was, but I always asked anyway. It just somehow seems to add more "oomph" to the situation - more eyes watching, more hounds barking, more hair standing up on my neck. Hunting with dogs is just down-right exciting!

I watched. I waited. And then I listened with a sunken heart as the shrill barks went right on past me down toward the clay bank and the next hunter. I contemplated my next move. However, that decision was soon made for me.

"A doe and yearling just came out at the clay bank," said a disappointed fellow hunter over the radio. "The dogs are coming in right behind them."

"All right let's go head 'em off and catch 'em up," said another disappointed hunter.

We all gathered at the clay bank, lined almost shoulder-to-shoulder forming a wall. A row of hands reached out and grabbed the dogs as they fought their way through the thick underbrush out into the road. As usual, a couple of hounds just didn't want to give it up. They sped through the blockade and ran across the road into the woods on the other side. A young teenaged hunter with lots of energy and pep zipped into the bushes after him. She quickly emerged dragging a reluctant hound dog at her heels.

Now that the last dog was resting in the box, it looked like this run was over. What's next? Well, you put out a fresh pack of dogs and start all over again. And that's just what we did.

It was already getting towards noon. This next run would probably be the last for the day because everyone needed to get back to camp or home for the afternoon Thanksgiving meal. One hunter had seen some nice looking tracks off Dorsey's stand. It just had to be a buck he had said. Consensus was this was the right place to put the dogs out.

While the dogs were being unloaded, the rest of us headed for a stand. "I'll stop here at the stump," said a hunter. "You might want to go on down to the liquor still." His two grand-youngâ€™ens waved and grinned from inside of the pickup, as we rolled past them.

Taking his suggestion, which was my thought as well, I headed on over to the liquor still. I had seen deer cross over this ridge many times in the past and knew that they tended to flank near the creek. I thought this ridge was a strategic place to be, and I knew I had a good position. Once again, I jumped up on top the dog box for better vision and hearing.

The dogs soon jumped, and their shrill barks and howls were coming fast. Here they come, I thought. Watching, more watching, and listening. Then just as quickly, it sounded like they turned and headed away from me. "Where did they go?" I asked Brenda. "Sounds like they're turning away," she answered.

"Let's go," I said, as I jumped down from the dog box. I grabbed my rifle and put it in the truck. "Yeah, I think they did turn. We better head back up the road."

I got into the truck and turned the key, but changed my mind before cranking. I stopped and listened one last time. "Do you hear that?" I asked. "I think they're coming back!"

I got out of the truck and back up onto the dog box with my Winchester model 100. Sure enough, we heard the barking dogs coming right toward us now. They were getting so close I could hear the palmettos rustle. There was a hodgepodge of wind blowing and dogs howling and bushes crackling. The pounding of my heart throbbed in my ears.

Like I said earlier, usually the deer flank closer to the creek. That's good in a way because you can get a good side shot into the heart. But this buck headed straight towards me! It looked like it might have to be a head-on shot. I really didn't want to do that and chance messing up a nice set of horns!

The dogs were closing the gap, and the startled deer turned and flipped sideways for a split second as he was turning to run straight away. I took my shot and hit him high on the back, which wasn't my desired point of entry. I wanted a clean shot through the heart. He was down, but not quite for the count. I jumped down from the dog box and rushed toward the deer. When I got to the deer, I had to finish him off with one last shot to the neck.

"I got him," I shouted to Brenda and through the walkie-talkie at the same time.

I rested my rifle against a nearby tree. The adrenalin rushed through my body and pumped me with enough awareness and energy to grab hold of two of the dogs as they sped by me. I had one buck on the ground and a hound in each hand when the rest of the hunting crew reached the hub of excitement.

I was able to give special thanks on this Thanksgiving Day for my first harvest of the season - a very nice six-point buck. â€œThanks for sending me the deer, Dad.â€

I hope all of you had a memorable Thanksgiving, too.

Happy hunting - until next time!