I spotted the back side of a whitetail deer going into the thicket there at the Pike Hole. I quickly reached into the truck and grabbed my speed loaders and my muzzleloader. I was itching to get that first shot. But whoa - hold on there a minute. Iâ€™m getting ahead of myself. Letâ€™s start from the beginning . . . . . 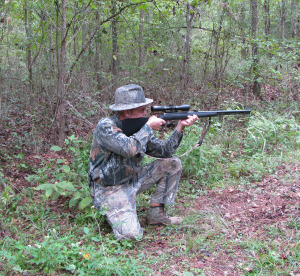 I had resisted getting a Cabelaâ€™s Club Visa card long enough, but when a good hunter needs something, he needs it. My sole intent for getting the card was for emergency purchases that I could pay back right away. As you may or may not know Cabelaâ€™s Club Visa has a point system whereby you earn Cabelaâ€™s bucks, or points, for purchases. One evening while thumbing through my Cabelaâ€™s special hard-cover, limited edition Hunting catalog, Brenda and I were having a discussion about ordering silk long-johns for ourselves. (It gets cold sometimes - even in Florida!) I came to the muzzle loader section in the hunting catalog and mentioned to my dear wife Brenda that one day I was gonna get me one. Well out of the blue and to my amazement, Brenda said, â€œWell, go ahead, honey, now is as good a time as any.â€

Yee-hah! I salivated like an ole coon hound. Weâ€™re off! I was in overdrive.

Never having owned a muzzleloader, I wasnâ€™t sure what I needed. I frantically turned page by page through the muzzle loading section of the Shooting Gear in the catalog. I studied the guns, scopes, and some accessories.
I passed on the powder and primers due to shipping restrictions. I immediately got Cabelaâ€™s on the phone (before the wife changed her mind). I ordered a CVA 209 Magnum, stainless barrel, camouflaged stock, a 2.5-7 x 32 mm black powder scope and rings, Thompson Center clear 209 capper, a bullet starter, a tube of bore butter, a tube of super lube anti-seize, and some black powder solvent.

â€œAnything else I can help you with?â€ asked the Cabelaâ€™s customer service rep.

â€œOh, yeah, and a couple of pairs of them silk long-johns,â€ I said. In my excitement I had almost forgotten the original purpose for placing my order.

I laid back in my recliner with a grin of satisfaction plastered across my face, and watched as Brenda passed by while in the middle of her dutiful chores; doing those loving things that wives do for husbands that husbands sometimes take for granted.

â€œWell, how bad did you hurt us?â€ she asked, referring to the total cost for my latest purchase.

â€œWhat?!â€ she exclaimed. It was her turn to be amazed.

â€œI used our Cabelaâ€™s points,â€ I said, very pleased with myself.

The highly anticipated day finally arrived when I received my shipment containing the muzzleloader. I quickly ripped open the box and studied the instructions. Soon the muzzle loader was properly assembled and bore sighted. I eagerly awaited my next trip to the range.

I had never shot a muzzleloader before when hunting. My trip to the range proved to be enlightening. When they say, â€œwait for the smoke to clear,â€ they ainâ€™t lying. After that first shot, I was immediately engulfed with a cloud of black powder smoke that penetrated my eyes, nose, and throat. With the gun sighted in dead on at 100, I was ready to hunt!

Being the Red Neck that some say I am, during hunting season I tend to have the appropriate firearm in the truck at all times during legal shooting hours when Iâ€™m not at work. This was the case on Sunday, February 18, 2007, when the wife and I were headed home from the Old Mt. Pleasant United Methodist Church. As is our custom, we took the long way home. We stopped at â€œThe Hogâ€ for lunch for some of the best chicken strips and biscuits in Hosford before heading to the Apalachicola National Forest.

Our drive took us onto FH 13. We stopped and glassed from several prime locations from there on to 26, but to no avail. The deer just werenâ€™t walking. Going further, we turned onto 19, where there had recently been a controlled burn. I noticed an aerial reflective target nailed into the ground that was badly burnt. Being the inquisitive fellow that I am, I stopped to check it out. While doing so, I happened to glance back toward a deer stand called the Pike Hole. I spotted the back side of a deer going into the thicket there at the Pike Hole. I quickly reached into the truck and grabbed my speed loaders and my muzzleloader. I was itching to get that first shot.

â€œI just saw a deer go into the woods. Iâ€™m gonna see if I can find him.â€ I was still wearing my Sunday church clothes, and my camo tie flapped in my face as I trotted down the left rut of the road. I slowly scanned the forest, then saw the deer in the woods about 20 yards away. He had his head down feeding and was unaware of my presence. My heart pounded. I raised the gun â€“ ready. He stepped from behind the bush. I saw horns. He was a legal spike! I aimed. I fired. Through the cloud of smoke, I saw the deer run away. I wasnâ€™t sure if I had hit him or not.

This called for some serious hunting. I returned to the truck to change from my church clothes to the camos and boots that I always have handy. Once properly attired, I was ready to roll.

â€œGet up on the tool box and watch for the deer,â€ I said.

Brenda stood on the back of the truck with her pretty pink church dress blowing in the breeze and binoculars pinned to her face.

With a reloaded gun in hand, and hand-held radio, I went looking for traces of blood. I didnâ€™t find any.

â€œIâ€™m going into the thicket,â€ I shouted to Brenda. â€œCall me on the radio if you see him.â€

I stepped up on a log for a better view over the bushes. As I did, my heart sank as I saw the deer running away. He went about 50 yards then stopped at the edge of the tree line. There were too many trees. I couldnâ€™t get a bead. I started bobbing and weaving, looking for a hole through the trees. I saw the deer as he began quartering to my left. I broke into a full run, straight in, hoping for an intercept. Now I donâ€™t know if you folks out there have ever ran through planted pines that have been thinned. But Iâ€™m here to tell ya, it ainâ€™t no picnic. If the up and down of the rows donâ€™t trip you, the broken up pieces and parts left behind from the harvested trees will.

I was getting a little winded, so I stopped about 10 yards from the edge of the tree line. At just that time, the deer stepped out in front of me! Gasping for breath, I pulled the trigger and fired. He was so close the bullet and sabat both hit him! He fell to the ground amid a cloud of black powder smoke.

â€œDid ya get him?â€ asked Brenda over the radio.

Another call came over the radio. â€œWas that you, Kenny?â€ It was Bert, who spends much of his free time scouting the woods. It was no surprise that he would be somewhere in the area that day.

I tried to answer, but my portable didnâ€™t have enough power. So Brenda relayed messages back and forth.

â€œIâ€™m at the first bar pit on 10. Be there shortly to help you out,â€ offered Bert.

I was too hyped up from excitement to wait for Bert. I stumbled over rows of planted pines; and while gasping for air, I dragged the spike out to the road. Brenda was already waiting for me with a jug of iced tea and my inhaler. By the time I caught my breath, Bert arrived.

Bert helped me field dress the deer and load him on the truck.

I told him the story of how I shot once and missed. Then the unlucky deer stayed around to get himself killed.

â€œHow did you miss the first shot that close?â€ Bert asked.

I told him that I didnâ€™t know, but since the second shot broke his back, my gun must be shooting high.

â€œWell, you got him,â€ said Bert. â€œCheck your gun later when you get a chance.â€

Following Bert's sage advice, a few days later I headed for the range. I was gonna figure this out. Now Iâ€™m no expert, but when I shot the first round, it hit the bullâ€™s eye at 100 yards. I was confused as to why my gun shot high over the deer in the woods. I started moving the targets closer and determined the arc for a muzzle loader is so steep at 15 yards that I was shooting 8 inches high. So my recommendation to any muzzle loader hunter is prior to going hunting, sight your gun in and then shoot those closer ranges as well as the medium ranges and remember how high you are at what ranges out to zero, so you donâ€™t have the same problem I did.

Epilogue: A few weeks later I saw on T.V. a show where another muzzleloader hunter had experienced the same fire and miss with his muzzleloader that I had.

Therefore, I concluded that you need to take this into consideration when shooting at closer range and aim accordingly.

Now before you go emailing me that the accompanying photo is not of a CVA 209 Magnum, know this, the spike pictures did not come out. So the muzzleloader you see in this photo is my new Omega Z5, because my son who got the muzzleloading "bug" has my first gun.