My Two 2014 Archery Season Does

It looks like my pre-season scouting paid off pretty well for archery season in Zone D this year.  Because of a disability received in the military, I applied for and have a permit that allows me to use a crossbow during archery season in the wildlife management areas. 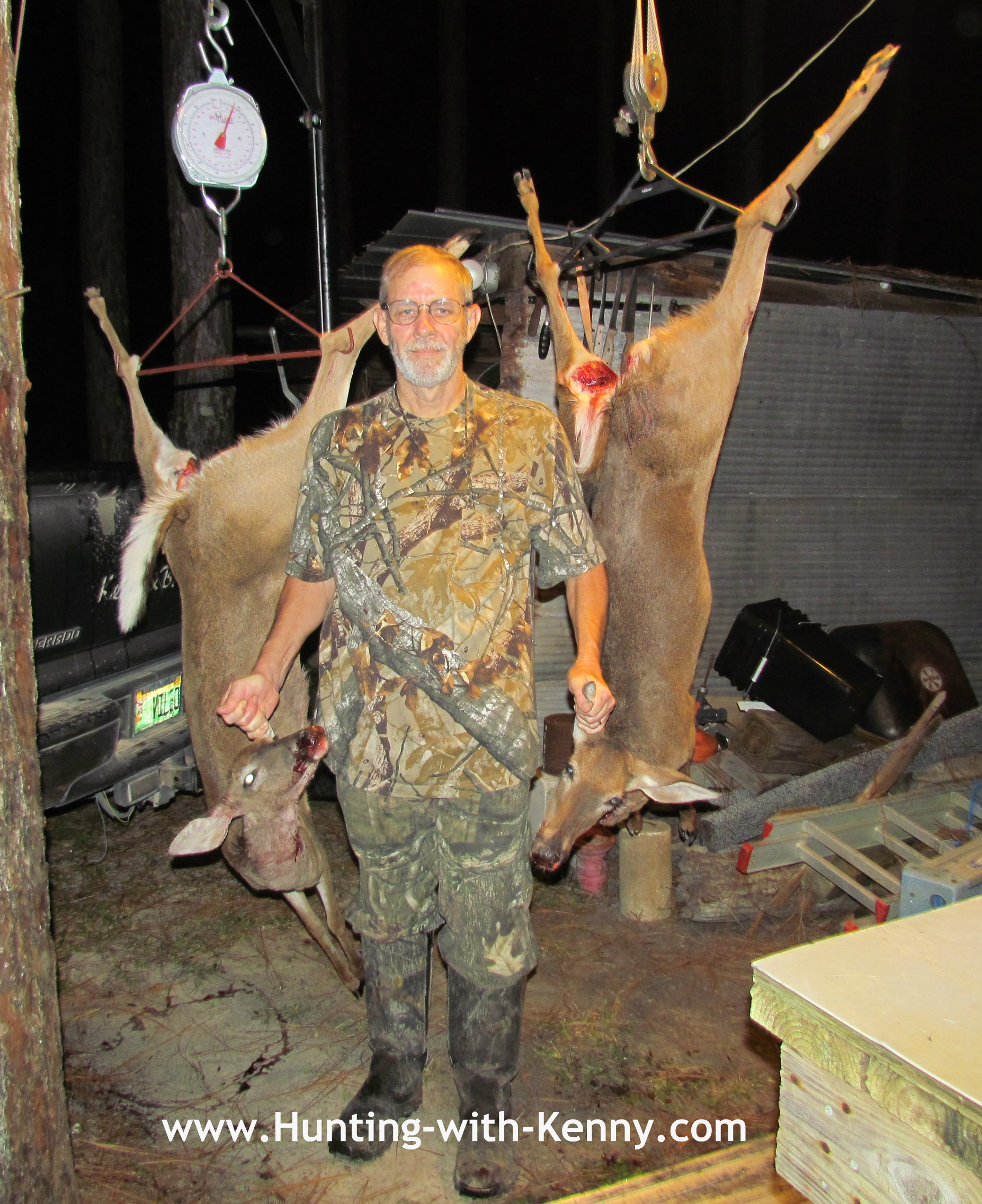 All during October, I had been checking and rechecking my favorite hunting areas in the Apalachicola Wildlife Management area in search of deer.  A few weeks prior to archery season, I set up cameras in a couple of spots throughout the woods.  If no deer traffic appeared, I moved the camera to a different location.  After viewing the photos on the camera, I decided on the best possible location for my ladder stand in terms of deer traffic, my opportunity to see the deer during daylight hunting hours, and the nearby trees and underbrush to provide camouflage for my stealth approach.  Up went the ladder stand in this location with hopes for the best end result -- food on the supper table!

The optimal time for these particular deer that I had seen on camera to be walking was late afternoon, about an hour prior to sunset.  Each day for a week, I sat at my raised perch looking eye-to-eye with the sturdy pines standing among the palmettos.  I did have a couple of disappointments.  Once, as I watched a deer pass by out of bow range.  Then again, when two deer walked behind me. Just the slightest movement or sounds can startle a deer quicker than you can pull the trigger.  And that's just what happened.  Both deer flashed their white flags as they high-tailed it out of sight when I turned and raised my crossbow.

I was beginning to think that all my best laid plans and strategies were going to be to no avail.  But I was determined and knew I would try again another day.

By now, you must be wondering how did I end up with TWO deer after all?  Sure, I have to admit that blind luck plays a big part in having a successful hunt.  But I know that I, also, have to do my part by being out there in the woods doing the hunting, hunting, and more hunting.  After several disappointing days, it all came together, but not as I had expected.  On the way to my ladder stand, there stood a doe alongside the road.  I suspect that she was one of the ones I had seen either on camera or in real time while up in the ladder stand.  I stopped the pickup, slowly got out, and braced my crossbow over the hood of the truck.  I waited.  Then I waited some more.  Lucky for me, it was not a good day for the doe as she walked within bow range.  I made a clear clean shot as the bolt entered and let the air out of her, and she went straight down.  No tracking required.

Harvesting the second doe is yet another story.  This one, too, was not as I expected.  I had met a bunch of campers who were fishing at the river the day before.  One of them mentioned that he sure would like to have some tasty deer liver.  Well, being that me and the Mrs. didn't care much for that delicacy, I figured I would stop by and drop that off to the man at the river before heading back to the hunt camp.

Now mind you, I am a careful driver with a clean traffic history.  But before I could get to the river with the liver, I came across yet another doe. I swerved.  She swerved.  I braked, but it did not matter.  Like the doe before her, it was not a happy ending for this doe either. As I braked and swerved, she hit the lower left part of my bumper.  I went another 20 feet before I could stop.  Then I backed up to check her out.  I saw that her pelvis was broken.  I grabbed the knife that I had used to field dress the first doe, and then cut this doeâ€™s throat to quickly end her suffering.

By the time I had made it back to the hunt camp, it was after dark.  I could see that I had my hands full with, not only one, but two deer to clean.  So I called my son-in-law Tony to come and help me out.  Being an outdoorsman like myself, Tony was quick to get here and knew just what to do to help prepare the meat for the freezer.

This tale, like all deer tales, has come to an end.  Me, the Mrs., Tony and his family, and the man at the river will all be grateful as we enjoy the bounty of the vittles provided by the two deer that made it possible.